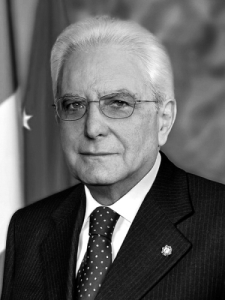 Sergio Mattarella was born in Palermo on 23 July 1941. He has three children.

In 1964 he obtained a summa con laude Law Degree from “La Sapienza” University of Rome with a dissertation on: “Public Policy Guidelines”. He was admitted to the Palermo Bar Association in 1967.

He taught parliamentary law at the Law School of the University of Palermo until 1983, when he took leave of absence upon being elected member of the Chamber of Deputies.

Most of his scientific research and publications have focussed on constitutional law (the role of the Regional Government of Sicily in the economy, bicameralism, legislative process, parliamentary scrutiny, compensation for expropriation, evolution of Sicily’s regional administration, oversight over local government). Other publications have been on subjects linked to his activity in parliament and government. He has been a speaker at conferences on law studies and has held lectures at Masters and postgraduate courses in several universities.

His political experience originated in the Catholic social and reform movement. In 1983 he was elected to Parliament for the Christian Democracy Party in the western Sicily constituency and remained a member of the Chamber of Deputies until 2008.

In the XIII Legislature he was Leader of the People’s and Democratic Parties Parliamentary Group (from the beginning of the parliamentary term to October 1998).

From July 1987 to July 1989 he was Minister for Relations with Parliament. During his mandate, legislative reform of the Prime Minister’s Office was enacted and secret ballot voting in Parliament was discontinued as the standard procedure. He was Minister of Education from July 1989 to July 1990. During his term in office the National Conference on Schools was held in January 1990 and a primary school reform was implemented introducing a “module” with three teachers for two classes (Act No. 148 of 1990).

He became Deputy Prime Minister in October 1998 and Minister of Defence from December 1999 to the June 2001 elections. During his mandate, laws were enacted to abolish conscription and to turn the Carabinieri into an autonomous armed force. In those years, Italy stepped up its involvement in UN peace missions and contributed significantly to the interposition and peacekeeping operations in Bosnia-Herzegovina, Kosovo and the Former Yugoslav Republic of Macedonia. During that period, Italy strongly supported the establishment of the European Security and Defence Policy, which led to the creation of the first European Army Corps.

He did not run for the 2008 political elections and ended his political activity.

In May 2009 Parliament elected him member of the Bureau’s Council for Administrative Justice, of which he was elected Deputy Chairman.

He was elected twelfth President of the Republic on 31 January 2015.

On 29th January 2022, he has been re-elected President of the Republic.