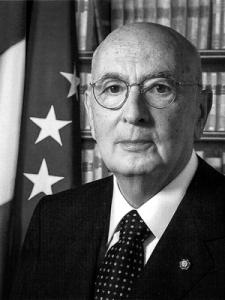 Giorgio Napolitano was born in Naples on June 29th, 1925. He is married to Clio Bittoni and has two sons, Giovanni and Giulio.

He graduated in law from Naples University in December 1947, with a dissertation on political economy. In 1945-46 he engaged actively in the Student Faculty Councils movement, and was a delegate to the first National University Congress.

Since 1942, as an undergraduate in Naples, he joined a group of young anti-Fascists and in 1945 he joined the Italian Communist Party, of which he was a militant and then a leader until the Democratic Party of the Left was established.

From the autumn of 1946 to the spring of 1948 he was a member of the Secretariat of the Italian Economic Centre for Southern Italy, chaired by Senator Paratore. He took also an active part for over 10 years in the Movement for the Rebirth of Southern Italy, since its foundation in December 1947.

He was elected to the Chamber of Deputies for the first time in 1953, and with the exception of the 4th Parliament he was a Member of Parliament until 1996, always re-elected in the Naples constituency.

His parliamentary activity began as a member of the Budget and State Holdings Committee, and focused - also in debates on the Floor of the House - on the issues of Southern Italy’s development and national economic policy.

In the 8th (from 1981) and 9th Parliaments (until 1986) he chaired the Communist group in the Chamber of Deputies.

During the 1980s his activity focused mainly on international and European policy issues, both as a member of the Foreign Affairs Committee of the Chamber of Deputies (from 1984 to 1992 and from 1994 to 1996) and of the Italian delegation to the North Atlantic Assembly, and also through manifold political and cultural initiatives. As far back as the 1970s he was an active lecturer abroad, visiting International Policy Institutes in the UK and Germany and many US Universities (Harvard, Princeton, Yale, Chicago, Berkeley, SAIS and CSIS in Washington).

From 1989 to 1992 he was a Member of the European Parliament. On June 3rd 1992, in the 11th Parliament, he was elected Speaker of the Chamber of Deputies, and remained in office until the end of that Parliament in April 1994.

During the 12th Parliament he was a member of the Foreign Affairs Committee, and Chairman of the Special Committee on the Reorganisation of the Broadcasting Sector.

During the 13th Parliament he served as Minister of the Interior and for the Coordination of Civil Protection in the Prodi Government, from May 1996 to October 1998.

From 1995 to 2006 he was President of the Italian Council of the European Movement.

From June 1999 to June 2004 he chaired the Constitutional Affairs Committee of the European Parliament.

On September 23rd 2005 he was appointed life Senator by the President of the Republic, Carlo Azeglio Ciampi.

In recognition of his dedication to the cause of Parliamentary democracy and his contribution to the rapprochement between the Italian Left and European Socialism, in 1997 he was awarded the Leibnitz-Ring International Award in Hannover for his “lifelong” commitment. In the field of the “march towards democracy” he was awarded the 2010 Dan David prize in Tel Aviv, for his contribution to the strengthening of the values and of the democratic institutions in Italy and Europe.

He undertook an intense publishing and editorial activity. He contributed to the journal Società (Society) directed by Ranuccio Bianchi Bandinelli and, from 1954 to 1960, to the journal Cronache meridionali (Southern Chronicles), with many essays on Southern Italian issues. In 1962 he published his first book Movimento operaio e industria di Stato (Workers' Movement and State Industry), with special reference to the analysis of Pasquale Saraceno.

In 1975 he published the book Intervista sul PCI (Interview with the Italian Communist Party) with Eric Hobsbawm, which was translated in over 10 countries.

In 1979 he wrote In mezzo al guado (At Mid-Crossing), about the period of "democratic solidarity" (from 1976 to 1979), when he acted as spokesperson for the PCI and handled relations with the Andreotti government on economic and trade union issues.

In 1988, in his book Oltre i vecchi confini (Beyond Old Boundaries), he addressed the problems that arose in the years of the thawing in relations between East and West, during the Reagan Presidency in the USA and Gorbachev’s leadership in the USSR.

His work Al di là del guado: la scelta riformista (Beyond the Crossing: the Reformist Choice) collects his political speeches from 1986 to 1990.

The book Europa e America dopo l'89 (Europe and America after 1989), published in 1992, is a collection of lectures he gave in the United States after the fall of the Berlin wall and the Communist regimes in Central and Eastern Europe.

In 1994 he published, partly in the form of a personal diary, the book Dove va la Repubblica - Una transizione incompiuta (Where is the Republic Heading - An Unfinished Transition), dedicated to the period of the 11th Parliament when he was Speaker of the Chamber of Deputies.

In 2002, he published his book Europa politica (Political Europe), at the height of his activity as Chairman of the Constitutional Affairs Committee of the European Parliament.

His book Dal PCI al socialismo europeo: un'autobiografia politica (From the PCI to European Socialism: a Political Autobiography) was published in 2005.

In 2009 he published Il patto che ci lega (The Pact that binds us), that collects his speeches during the first half of the Presidential mandate.

In 2011 he published Una e indivisibile. Riflessioni sui 150 anni della nostra Italia (One and indivisible. Thoughts on the 150 years of our Italy.